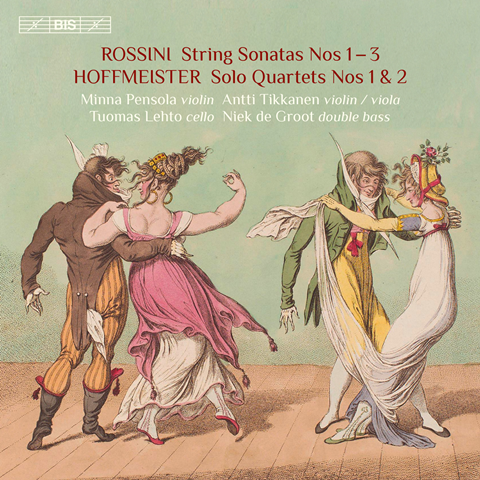 These five works date from around the early years of the 19th century and combine attractive melodies, varied instrumental textures and challenging bravura writing. Violinist Minna Pensola has most of the fun and games in the first three of Rossini’s youthful string sonatas, played here in their original instrumentation. She characterises each movement with innate musicality and combines clarity and brilliance in the testing passagework of the cheerful, often witty fast movements with a glowing expressive quality and unforced lyricism elsewhere, especially in the central andantes. Her colleagues support with poise and polish; and when their moments of glory arrive, they rise eloquently to the occasion.

Bassist Niek de Groot is the star of the show in the Hoffmeister pieces, having himself prepared the performing edition for this world premiere recording of no.1. His accounts of some of Hoffmeister’s dizzying writing for his instrument, while not without the odd rough edge in the outer movements of no.1, show plenty of spirit and dexterity, substantial accuracy and expressive lyricism in no.2, the chirpy final rondo giving him the opportunity to shine alone in a quasi-cadenza passage.

Pensola occasionally shares the solo spotlight, notably in the expressive slow movements. The recording is natural, immediate and well balanced.